On April 12 [April 11 US date], 2006, the people of Bikini Atoll filed a lawsuit against the U.S. Government in the U.S. Court of Federal Claims. The lawsuit seeks compensation under the Fifth Amendment to the U.S. Constitution for the taking of their property damage claims resulting from the U.S. Government’s failure and refusal to adequately fund the March 5, 2001 order of the Nuclear Claims Tribunal. Alternatively, the people of Bikini seek damages for the U.S. Government’s breaches of its fiduciary duty to provide just and adequate compensation for the taking of their lands in consideration for their agreement to move off Bikini Atoll and for the breach of the implied duties and covenants integral to that agreement, the Compact of Free Association, and the Section 177 Agreement. The lawsuit will seek compensation and/or damages of at least $561,036,320 (which represents the Tribunal’s original award to the Bikinians of $563,315,500 less the two payments totaling $2,279,180), plus interest as required by law. The total with interest on the filing date of April 11, 2006, is approximately $724,560,902.

THE PEOPLE OF BIKINI, BY AND THROUGH THE KILI/BIKINI/EJIT LOCAL GOVERNMENT COUNCIL, ELDON NOTE, ET AL., Plaintiffs v. UNITED STATES OF AMERICA, Defendant. No. 06-288C

Bikinians file lawsuit against the U.S. Government in the U.S. Court of Federal Claims
Filed: April 11, 2006 [Download in .PDF]

Bikinians' Motion in Opposition to the U.S. Motion to Dismiss the Bikinians' lawsuit
Filed: December 18, 2006 [Download in .PDF]

Bikinians' Motion to Surreply to the U.S. Motion to Dismiss the Bikinians' lawsuit
Filed: February 16 [Download in .PDF]

Bikinians' Surreply to the U.S. Motion to Dismiss the Bikinians' lawsuit
Filed: February 16 [Download in .PDF]

Notice of Reassignment of Judge: our case has been reassigned from Judge Block to Judge Miller, the judge in the Enewetak case. The court has filed a “Notice of Reassignment to Judge Christine O.C. Miller” stating in its entirety: “Pursuant to Rule 40.1, this case has been reassigned to the above Judge for the conduct of proceedings pursuant to the Rules of the United States Court of Federal Claims.”
Filed: February 27, 2007 [Download in .PDF]

Order Joining the Bikinians' lawsuit with the lawsuit filed by the people of Enewetak
Filed: March 14, 2007 [Download in .PDF]

US Response to Oppose Order to Consolidate Bikini and Enewetak Cases
Filed: March 23, 2007 [Download in .PDF]

US Court of Appeals for the Federal Circuit decision affirming the dismissal of the Bikinians' lawsuit
Filed: January 29, 2009 [Download in .PDF]

Appeal to US Supreme Court of the dismisal of the Bikinians lawsuit against the United States
Filed: October 23, 2009 [Download in .PDF]

U.S. Response to US Supreme Court Appeal by the Bikinians.
Filed: March 5, 2010 [Download in .PDF]

US Supreme Court Denies Petition by the Bikinians.
Filed: April 5, 2010 [Download in .PDF]

Current Trust Funds for the People of Bikini Atoll

In 1982 the people of Bikini received a second trust fund from the U.S. government totaling $20 million entitled, The Resettlement Trust Fund for the People of Bikini (U.S. Public Law # 97-257). This trust fund was later supplemented (U.S. Public Law # 100-446) with $90 million in additional funds to provide for a cleanup of Bikini and Eneu islands of Bikini Atoll. These funds are also used for construction and resettlement activities for Bikinians living on Kili Island and Majuro Atoll, including Ejit Island. A typical fiscal year budget currently ranges from between $5 million and $7 million. These funds pay for local government operations(power plant operation and maintenance and repairs on Bikinian houses in Majuro, Ejit and Kili Island, Council employee payroll, scholarships for students studying in the United States and other countries, life insurance, travel for meetings, attorney's fees, etc.). The total value in June of 2016 was approximately US$70 million. The value of the fund today is unknown because the local government does not release this information.

In 1986, an agreement with the U.S. government, the Compact of Free Association (COFA), became effective. Section 177 of the COFA pledged reparations for damages to the Bikinians as well as to other northern atolls in the Marshall Islands. The damage payment for Bikini amounted to $75 million to be paid over 15 years ($5 million per year). Beginning in 1987, $2.4 million has been distributed annually to the total population of Bikinians in quarterly per capita payments. $2.6 million of this $5 million annual payment goes into a trust entitled, The Bikini Claims Trust Fund (U.S. Public Law #99-239). This trust fund is designed to exist in perpetuity and shall continue to provide the Bikinians with an annual payment of 5% (distributed quarterly at 1.25%) from the corpus from the trust. Currently each Bikinian gets approximately $480 a year. The total value of the Bikini Claims Trust Fund in June of 2016 was approximately US$55 million. The value of the Bikini Claims Trust Fund today is unknown because the local government does not release this information.

On March 5, 2001, the Nuclear Claims Tribunal handed down a decision on a seven year lawsuit the Bikinians had brought against the United States for damages done to their islands and their people during the nuclear testing on Bikini. The Tribunal gave them a total award of $563,315,500.00 [loss of value $278,000,000.00, restoration costs $251,500,000.00, suffering and hardship $33,814,500.00], which is the final amount after deducting the past compensation awarded by the U.S. government [see above three trust funds]. The problem is that the Nuclear Claims Tribunal, which was created by the Compact of Free Association of 1986, was underfunded and does not have the money to pay for this claim. It is now up to the people of Bikini to petition the U.S. Congress for the money to fulfill this award. This is expected to take many years and it is uncertain if the United States will honor their claim.

Read the decision of the Nuclear Claims Tribunal in .pdf format: [download]

Read the January 2003 Thornburgh Report on the legitimacy of the Nuclear Claims Tribunal findings in .pdf format. [download]

Congressional Research Services report on the Republic of the Marshall Islands Changed Circumstances Petition to Congress [PDF] [order code RL32811], March 14, 2005: this is a middle of the road response from the CRS that takes into account the September 2000 RMI Changed Circumstances petition. 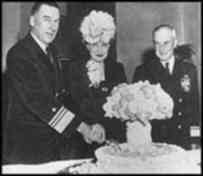 "The bomb will not start a chain reaction in the water, converting it all to gas and letting all the ships on all the oceans drop down to the bottom. It will not blow out the bottom of the sea and let all the water run down the hole. It will not destroy gravity. I am not an atomic playboy."

[picture: Admiral W.H.P. "Spike" Blandy, Mrs. Blandy and Rear Admiral F.J. Lowry celebrate the end of Operation Crossroads in November of 1946 in Washington, D.C. This photograph, entitled "Atomic Age Angel Food," drew heavy criticism from throughout the nation and from around the world.]